Backsliders and Apostates Will Burn

by The Austerity Program 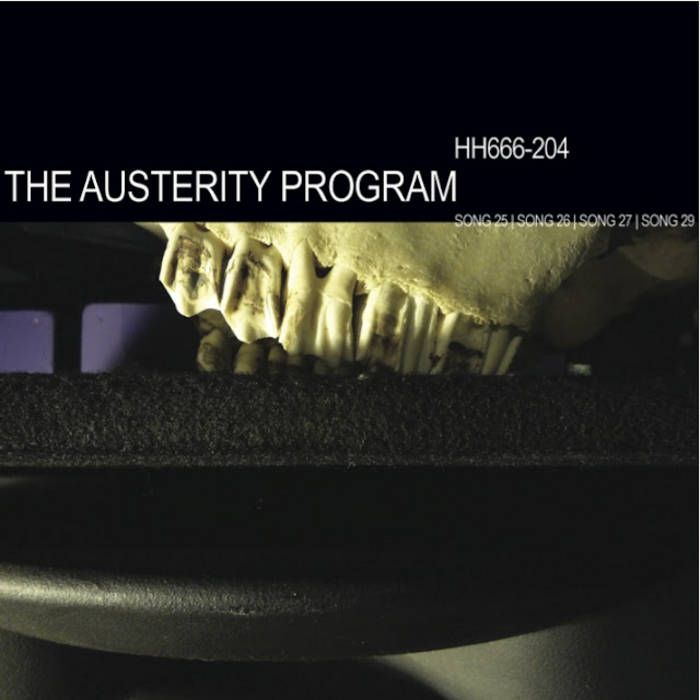 heypepperdragon i haven't unironically started headbanging to a record since my soul died somewhere in the vicinity of 2015, but this EP did it for me. totally fucking incredible the quality these folks cram into their releases, completely regardless of the length. super super super good. Favorite track: Song 26.

Three years after they released their debut full length, The Austerity Program are back with not even twenty minutes of music - a four song EP. You are not us, their label, and so you have no idea how much this absolutely infuriates us. We have probably been on the phone with these guys averaging at least once a week over that time. "Guys, guys, we have invested a LOT of money in you, when are you going to come out with something?"

And they fucking promised us like a triple LP or something. And then, three goddam years later, we get this. That's like, just over a song a year. And not a 45 minute, seven part epic song. These things are barely five minutes each. You could probably learn to play them over a long afternoon.

What the hell did we do? We run a record label - it's not like we're dumping toxic waste in playgrounds or laying off thousands of people who work in our factory or anything. This is small potatoes. So why the hell are we punished like this? And of course - of course - we're suddenly expected to drop everything because now they've got a record release show lined up and "it's very important that we have all formats available the night of the show." It's like, I...

I really don't even know what to type I'm so angry about this. I just had to walk away from the computer and get a glass of water to calm down. This is ridiculous.

What does it sound like? You tell us, man. We haven't even cracked open the reference copies because what's the point? Any schedule we made about this thing died literally years ago. If it's anything like their last record (and they claim that it is, but "so much better" - whatever, guys) it'll have a drum machine and some guitars and bass and that one guy will be singing and can I just tell you how pissed I am that I am even stuck writing this thing? Promo materials for something that the band swore up and down was going to be huge and on time. I just want to get a red marker and write "D - , SEE ME" all over the CD copy they sent us and just mail it back to them. No, even better, I want to FED EX it back to them just to make it totally obvious how screwed up they are. Four songs. Just... it's just astonishing that they really think this is their next record.

So, yeah, The Austerity Program finally took some of their precious time and now expect us to put their EP out. Screw this - I'm going to go work on reviewing the layout for the next Torche record or something.

Thad Calabrese played bass. Justin Foley sang and played guitar. The Drum Machine took care of the rest.
The whole thing was recorded by the Austerity Program over a few nights between September and November, 2009.
It all went down at Kerguelen Studio (Astoria, NY).
Then John Golden over at Golden Mastering (Ventura, CA) mastered both the digital and vinyl. Thanks, John.
John Hastie, Mark Thompson and Aaron Turner listened to it along the way and provided some help. They are all good friends. Thanks, guys.

Other sincere gratitude: Jill Gallant-Foley, Abby Moskowitz + 1, Jon Wright, Ben, Max, Noah, Hazel, Steve Sadler, friends and families, all who have come to see us play. And thanks to you.

Bandcamp Daily  your guide to the world of Bandcamp